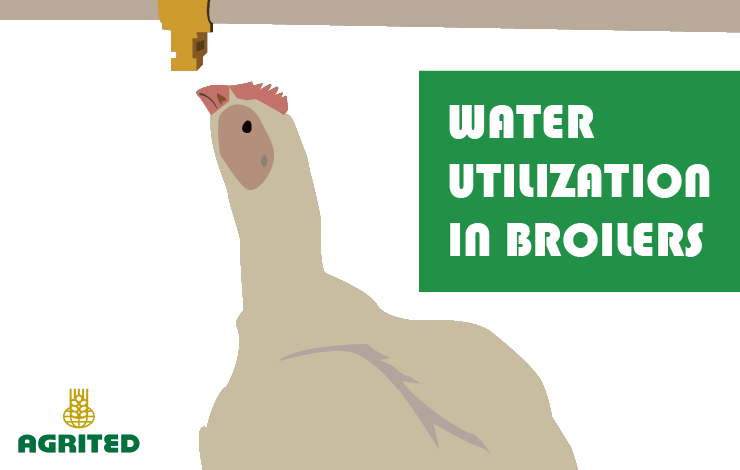 Water is a key nutrient for all living things and its use by both humans and livestock must be sustainable and responsible. For broilers, water intake can be considered an optimum trait.

Ensuring broilers optimize their water intake not only promotes the sustainability of broiler production through its influence on energy (ventilation) and water use, but also maximizes broiler health, welfare, and production. The routine on-farm recording of water intake is a key management practice which can help to identify potential health or management issues.

It is common for birds to increase their water intake during an intestinal disturbance therefore any sudden fluctuations in water intake may indicate the onset of intestinal issues and must be investigated. Birds often drink more water as a means to cool down when they get too hot, therefore prolonged periods of elevated water intake may be a sign of heat stress which is known to reduce intestinal integrity.

Excessive water intakes can also be an indication of high mineral levels in the water the birds are drinking (particularly sodium). Therefore, it is important to analyze the water being provided to the birds if water intake is excessive.

The impact of increased water in the gut can decrease feed transit time through the gut which in turn can reduce the efficiency of the gut and increase the risk of dysbacteriosis. Furthermore, increased moisture in the gut results in wetter feces which can increase litter moisture; wetter litter provides a more favorable environment for the parasite Eimeria and thus increases the risk of coccidiosis.

Like feeding, most drinking takes place when the lights are on with little drinking occurring in the dark. The time spent at the drinkers is highest in the period immediately after the lights have been switched on and water consumption is fairly evenly spread out throughout the day thereafter.

In order to allow birds to drink as they would prefer it is important to make sure that all birds have unrestricted access to water at all times when the lights are on, this is particularly important immediately after the lights come on. This means ensuring that:

Data collected from Aviagen shows that birds under good environmental and management conditions when fed a good quality pelleted feed and given access to an open water source (open drinking cups), spend, on average, approximately 6% of their time drinking and feeding. This data shows that the modern broiler does not need to spend a significant amount of time feeding and drinking in order to satisfy its requirements for growth and maintenance.

Time spent drinking (and feeding) will vary depending on temperature, feed type and drinker type. If a mash or poorer quality feed form (with a high percentage of fines) is fed, or if nipple drinkers are used or environmental temperature is high, time spent feeding and drinking would be expected to be higher.

Indeed, internal data from Aviagen shows that on a mash diet time spent feeding is approximately 3 times that of time spent feeding on a good quality pelleted diet. However, the amount of time birds spends drinking (and feeding) is still expected to remain fairly low (less than 20%).

Drinking behavior appears to be similar to feeding behavior in that birds will have a number of drinking ‘bouts’ in a day, in the same way that they have a number of feeding bouts or meals in a day. Each bout of drinking consists of several ‘visits’ to the drinker, with each visit being separated by a short period of time. This is also seen during feeding where a meal consists of several visits to the feeder each separated by a short period of time. Once a drinking bout (or meal) is completed, there will be a longer period of time during which the birds will not visit the drinker. This is important for a number of reasons. Firstly, it highlights the close link between feeding and drinking behavior and the importance of placing feeders and drinkers in close proximity to each other to allow birds to move freely to and from the drinkers during feeding. It also highlights the importance of establishing good feeding and drinking behavior right from flock placement by ensuring that good brooding practices are in place (appropriate environment, easy and unlimited access to feed and water). This will ensure birds are able to feed and drink in their preferred way optimizing feed and water intake, flock performance and overall flock health and welfare.

Secondly, if a drinking bout is interrupted or disturbed due to management practices such as weighing or vaccination, or high competition for access to drinkers as a result of an inadequate number of drinkers being supplied, this will impact on drinking behavior and possibly water intake. Birds do not go to the drinker and consume all they need in one visit and must be allowed to go to and from the drinkers freely until they have completed a drinking bout.

If birds are unable to return to a drinker to finish a drinking bout, this will result in reduced water and possibly feed intake.

It is estimated, from internal data, that birds have around 16 drinking bouts a day (although this will vary with age) which are fairly evenly spread across the day and that each bout consists of approximately 3 visits to the drinker. However, individual birds will have their own individual drinking behavior, and drinking bout number and duration, and the number of visits within a bout will vary between birds. As birds age, the average duration of a drinking bout declines but the amount of water consumed per bout increases as does the rate of water intake

FIG.1 Changes in drinking bout duration and amount of water consumed with age. 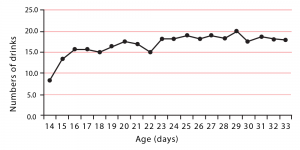